The AHA! Austrian Haflinger Adventure ’22 kicked off in Lans, Austria, a small village outside Innsbruck. Our intrepid travelers met for the first time, enjoyed a traditional Austrian dinner, and planned for the amazing activities ahead. 14 Hafluvvers from New York, Colorado, Pennsylvania, and California formed the core group, and our friends from Calgary, Canada made us an international group, just like our club. Jet lag made the evening an early one and we retired to dream of cream-colored ponies at the Gasthof Isserwirt.

Our official adventure began early the next morning: first a filling breakfast, followed by group photos in the hotel’s flower riot of a yard, then a delightful visit to Schloss Ambras, a vast 16th century palace that was the primary home of Archduke Ferdinand II (1529-1595). This early Hapsburg prince controlled Austria’s Tyrol region and collected artwork, armor, and oddities at Ambras that are beautifully displayed, just as in Ferdinand’s day, in the elegant galleries and halls of the palace, making it one of the oldest museums in the world. Set amidst lush gardens, Schloss Ambras was the perfect place to begin to understand the unique art, land, and customs of Austria’s Tyrol region where we would spend the next week.

We also met our Austrian guide, Franz, at the palace. A family friend of travelers Dirk and Karen Young’s for many years, Franz soon became an integral part of our group sharing historical happenings of the many places we visited, enjoying the horses (his family have deep Haflinger roots) and explaining some hard-to-translate terms, and steering us to terrific restaurants and sharing local customs.

After a tasty lunch at the famous Ottoburg restaurant in Innsbruck, located in a watchtower built in 1180, we sharpened our navigation skills, piled into our five rented cars, and headed off to find our first Haflinger farm, that of renowned breeder Lothar Zebisch. Zigging and zagging down small country roads, with each turn revealing another charming vista of grazing cows, snow-capped mountains, and traditional Tyrolean homes with waves of flowers washing over every balcony, we soon arrived at our first farm stop in Imst and experienced the first of many gracious and warm welcomes by Tyrolean Haflinger breeders.

Lothar and family greeted us at their tidy whitewashed barn to meet their mares and babies, then we paused by a hospitality area in the barn for drinks and snacks. Soon we all found ourselves with a small vial of traditional Austrian schnapps in our hands, toasting a hearty “Prost!” to each other and our good fortune to be together in a cozy Haflinger barn in Austria.

After introducing their four 2022 sale fillies in the barn, the Zebisch team presented each of the fillies at liberty in a small arena. With majestic towering Alpen peaks as a backdrop, each beautiful weanling Haflinger strutted her stuff, dainty hooves skimming the ground in lofty trots, bright big eyes blinking as each lovely lady was drawn to investigate our group standing near the gate…each filly was unique, and each seemed perfect to us. This, we soon learned, was the consistent, exquisite quality of young stock being produced by Tyrolean Haflinger breeders.

Concluding a full day of sightseeing and Haflingering, we enjoyed a beautiful drive up a narrow alpine valley to the charmingly named hamlet of Obergurgl, home of the Edelweiss & Gurgl Hotel. Established in 1889 by the Scheiber family, the fantastic resort is still managed by the Scheiber’s – who also happen to be world-renowned Haflinger breeders as well!

After a delightful dinner, our host, Lucas Scheiber, graciously spent time with our Haflinger Alliance group discussing the present and future of Haflinger horses. As the current president of the World Haflinger Breeding and Sports Federation, and chairman of the board of the Tyrolean Haflinger Breeder’s Association headquartered at Fohlenhof Ebbs, Herr Scheiber was generous with his time and knowledge and both patient and direct in answering our many, many questions about the breed and its direction in Europe. The American Haflinger Alliance was pleased to present a mare and foal statuette to Lukas celebrating the 75th anniversary of the Fohlenhof, and to thank him for his hospitality. 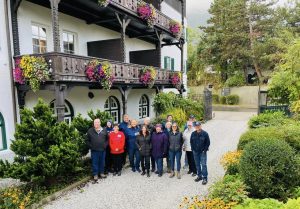 Off to seek adventure from the beautiful Gasthof Isserwirt 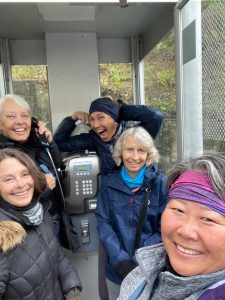 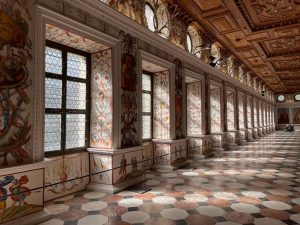 A hearty ‘Prost!’ with a Haflinger photobomber (of course!) 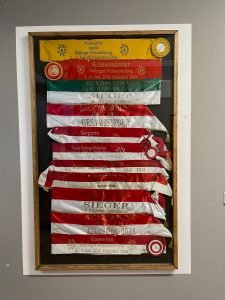 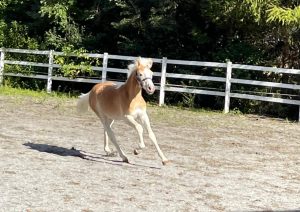 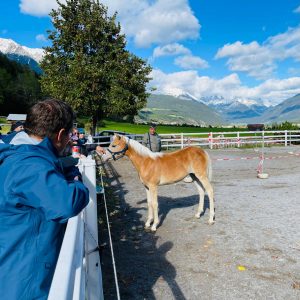 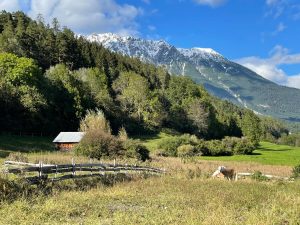 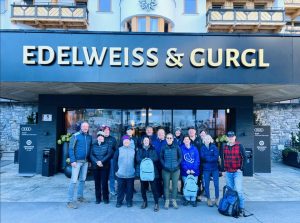