Our breakneck pace of equestrian adventure continued on Wednesday, starting with a great breakfast at Gasthof Hauserwirt followed by a breathtaking drive to Hochfilzer Haflinger Farm in the village of Soll. Located on a hillside allowing a beautiful view of a rich green valley ringed with snow-capped mountains, we enjoyed meeting Gabi Hochfilzer and her family over refreshments before touring their lovely barn. In addition to raising champion Haflingers on their stunning property, Family Hochfilzer operates a modern and luxurious hotel, chalets, and spa there… all with Haflinger views!

We played with several fillies and met their moms, then watched as they were all let loose to run down a fenced path to a huge green pasture near the village. We watched them gallop and frolic downhill until they were almost too small to see, golden dots on a vivid green field. We also learned that Hochfilzer horses had just recently come down from their high-country summer pasture, called an alm, to be inspected and prepared for the filly sale. As with many other farms we visited, the baby Haflingers who spent their first summer up cavorting in the huge Alpen pastures seemed not only fit and beautiful, but perhaps a little more confident and mature, you might even say sassy, compared to weanlings raised in smaller confines.

Our next farm stop was at an even higher altitude, near the famous ski area of Kitzbühel, at the gorgeous Leitner Haflinger Farm. Housed in a charming Tyrolean-style barn with gingerbread trim and a dramatic mountain backdrop, Elizabeth Leitner and family welcomed us to see their Haflingers and enjoy a lovely lunch (with schnapps!) served right in the center aisle of their gorgeous barn. We were getting used to dining with Haflingers… and we liked it! Several fantastic fillies were presented in the cobbled courtyard of the Leitner stable, and we were also free to visit their cattle and stroll around other areas of the picture-perfect farm. It was a glorious visit to a glorious farm.

There was one more visit scheduled for Wednesday, and it was one of the biggest surprises of our trip. We’d heard rumors that the Austrian Bundesheer (armed forces) used Haflinger horses for military operations, and through the clever work of Franz, our Austrian guide, we were able to visit the training facility near the town of Hochfilzen. The military facility includes not only the Pack Animal Centre but also training and competition grounds for Olympic biathlon teams and other high-intensity sports. We arrived to the sound of loud gunfire ricocheting up the valley but we soon became used to the constant barrage, as all the animals clearly were as well.

We received a fascinating and detailed introduction and tour of the expansive facility from Major Josef Hager, the Kommandant of the Centre, starting with a PowerPoint explaining why, in 2022, equines are still important to the Austrian army. There is a saying that when roads end or the weather doesn’t permit flying then the only way forward is by foot or hoof. Food and supplies, personnel, casualties, and communications equipment still must move in extreme terrain. When it comes to surefootedness in high altitudes, deep snow, bitter cold, and other challenging situations, nothing beats a sturdy Haflinger horse, except perhaps a mule! A trained Haflinger can easily transport 150 kilograms for up to 100 kilometers, whether it be food for soldiers or animals, tents and camping gear, or weapons and ammunition even while breaking trails for human handlers or traveling cross-country in rough terrain.

The Pack Animal Centre maintains a herd of approximately 50 Haflinger geldings, most purchased as young horses and then trained for several years for their military work. The horses are enlisted until they are 15 to 20 years of age then comfortably pensioned just like their human counterparts. The Centre also has a smaller program using donkeys for desert work, and even provides training for camel handling in extreme climates. The Haflingers are trained to carry unusual loads as well as drive and ride under challenging circumstances. While the horses in work spend time in a modern barn with spacious box stalls, they also enjoy turnout time to relax in large paddocks and pastures at the facility as well. The Centre trains not only animals, but soldiers too, to handle and care for the horses and donkeys, and to pack, drive, and ride as needed whether using the Centre’s animals or possibly local livestock on a foreign deployment.

We watched training sessions with soldiers maneuvering pack horses over and through obstacles including bridges, tunnels, and poles simulating downed timber, and watched soldiers packing different loads including hard panniers and woven baskets of supplies, weapons, fuel, and animal feed. Loads must be very carefully balanced to stay in position in rough country so packing receives much attention at the Centre. Touring the stables, we watched a farrier shoe a Haflinger with snow rim pads- necessary much of the year for these horses- and also observed horse training sessions in the facility’s beautiful indoor arena. Our visit concluded with a trip to the paddocks where, despite being valuable military equipment, the Haflingers of course had to horse around, chasing each other, staging mock battles, and generally acting like happy Haflingers.
Tired but invigorated from a very full day of Haflingering, we next drove to beautiful Salzburg for a two-night stay at the Gastehaus Priesterseminar, our fabulously located yet quiet and restful lodging operated by the archdiocese of Salzburg. After checking in, we reconvened at the famous and fun Augustiner Bräustübl Brewery for dinner in a massive building with hundreds of tables of all sizes for gathering to drink beer, enjoy tasty specialties purchased from the delicatessen arcade of small takeaway shops within the brewery, and partake in a spirited discussion of a busy day.

Thursday was a free day for us happy travelers to walk Salzburg’s historic streets, visit the old town and wave at Mozart’s birthplace, see the massive Hohensalzburg fortress, hum songs from The Sound of Music, do laundry, sight-see, and nap. Or in the case of the adventurous northern California girls, get up early, drive three hours to Vienna, and spend a wonderful day watching a training session at the famed Spanish Riding School!

And at least one of us spent the day meandering along the river in Salzburg, thinking about special fillies we had seen and wondering just how crazy it would be to try to buy one at the Fohlenhof filly sale as a group project. Stay tuned. 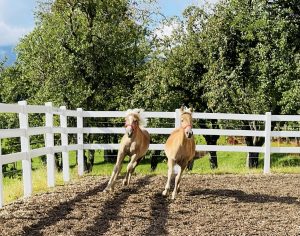 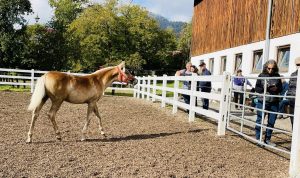 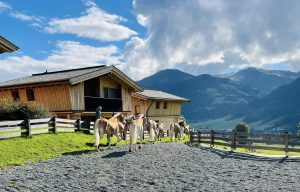 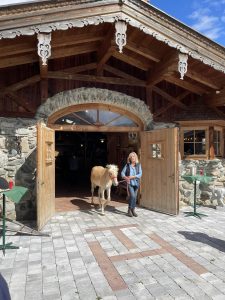 Elizabeth Leitner introduces her first filly to the AHA! group in her barn’s cobbled courtyard 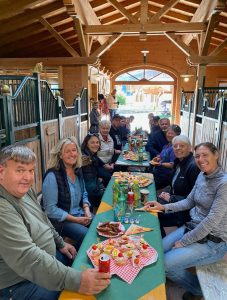 Lunch with Leitner Haflingers was a fabulous meal 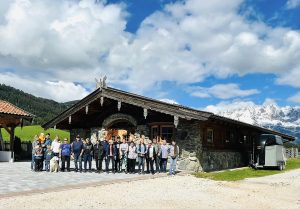 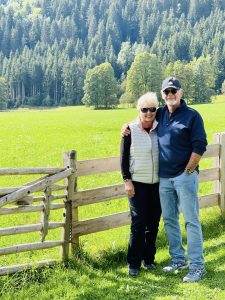 Donna and Howard in front of Leitner Farm pastures 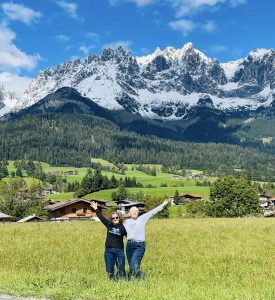 Annemarie and Suzi practicing their Sound of Music reenactment 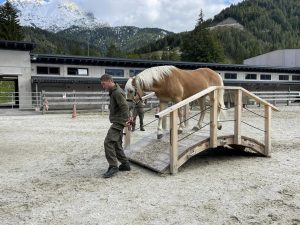 Soldiers and Haflingers practice maneuvers in hand, under saddle, and driving. 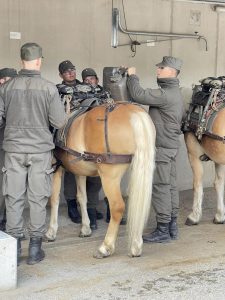 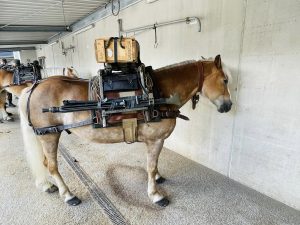 This handsome Haffie is packing large caliber weapons and ammunition 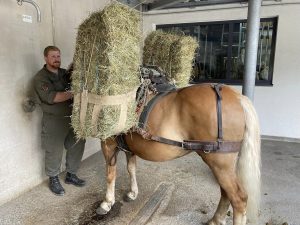 And this military Haffie, carrying hay for his comrades, requires a human partner at all times to remind him not to eat the load he’s responsible to carry 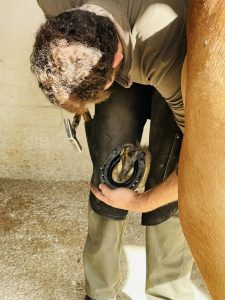 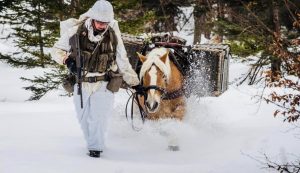 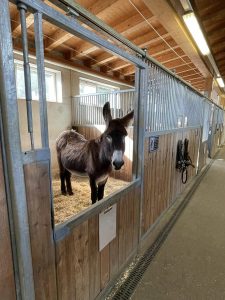 Several donkeys are on staff at the Pack Animal Center to help teach soldiers packing and handling skills they require. 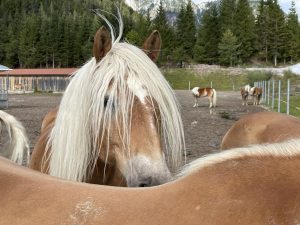 It’s not all work in the service Haflinger horses enjoy turnout, play, and grazing regularly 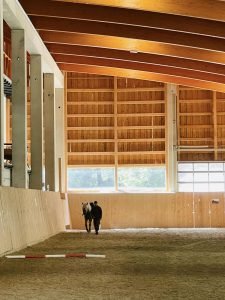 The huge indoor arena at the Pack Animal Center allows for year-round training, even when the facility is nearly buried in snow 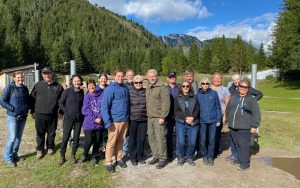 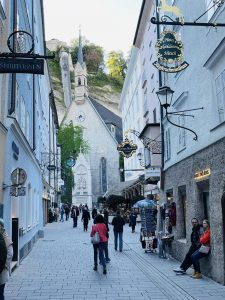 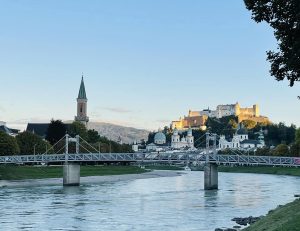 The sun sets on a very full day, and Salzburg’s Hohensalzburg fortress.